"She helped the cause of women by giving them a feeling that there was nothing they could not do."
-Eleanor Roosevelt 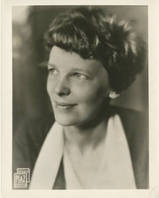 [George Palmer Putnam Collection of Amelia Earhart Papers]
Amelia was determined to make women equal with men. She was invited to Purdue University in 1935 to become a career counselor for women, to inspire them. She wasn’t really there to teach aeronautics, but to prepare women for the ﻿modern world. ﻿Her message was to study whatever you want. She wanted them to get a job before marrying. Amelia encouraged Purdue to create a better program with more opportunities for women and led many young women into careers that were usually only for men. She gave dozens of lectures and talks all over the country. First she was just an ambassador for aviation, convincing people that flying was neither dangerous nor unnatural. She spoke about the excitement of flying and encouraged females to become aviatrixes or anything else they wanted to.

Then she began to expand to women’s rights in general. She spoke about women ﻿﻿doing what they wanted﻿﻿ and thinking for themselves. Amelia believed that nothing in the world, especially in aviation, was impossible for women to do. She was the leader and a famous symbol of women’s achievements and feminism. Amelia spread her independence to all women, advocating women’s rights and leading them to broaden their opportunities. Wanting to prove that women could do anything, especially what men hadn’t done, she had a determination that she shared with women and the rest of the world.

﻿"Women must try to do things, as men have tried. When they fail, their failure must be but a challenge to others." -Amelia Earhart﻿

﻿"Now and then, women should do for themselves what men have already done—occasionally what men have not done—thereby establishing themselves as persons, and perhaps encouraging other women toward greater independence of thought and action." -Amelia Earhart﻿