"The more women who fly, the more who will become pilots, the quicker we will be recognized as an important factor in aviation."
- Amelia Earhart 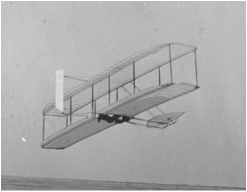 [Wilbur and Orville Wright Papers, Manuscript Division, Library of Congress]
In 1903, Orville and Wilbur Wright created the first working airplane, and for a while, planes were a curiosity. Though Amelia Earhart was a fantastic aviatrix, she wasn't the first. Harriet Quimby was the first licensed American woman pilot and she was the first to fly across the English Channel in 1912. A few years later, the world’s first permanent airmail service was established by US army pilots in 1918. In 1927, pilot Charles Augustus Lindbergh flew a solo nonstop flight across the Atlantic Ocean, making history. Amy Johnson was the first woman to fly solo from England to Australia, and women pilots became more regular, with at least 600 female pilots in 1933. The number dropped considerably by 1934 because of the Great Depression. The first modern passenger plane was introduced in 1933. Since then, aviation has been changing rapidly.