"When a great adventure's offered, you don't refuse it."
-Amelia Earhart 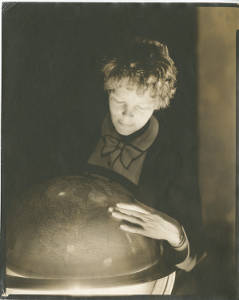 [George Palmer Putnam Collection of Amelia Earhart Papers]
Amelia Earhart earned her pilot’s license from the Fédération Aéronautique Internationale in 1923. She was a social worker at ﻿Denison House﻿ in 1928 when she was asked if she would like to do something dangerous in the air. George Putnam was trying to find “an American girl with the right image,”  to be the first woman to fly across the Atlantic Ocean as a passenger. After a couple false starts, Amelia Earhart, pilot Wilmer Stultz and mechanic Louis Gordon completed their “voyage in the clouds.”  But Amelia wasn’t as pleased because she felt that she hadn’t done enough to deserve so much credit. In 1928, she became the first woman to make a solo round-trip across the United States, and she came in third place in the first Women’s Air Derby in 1929. Then she helped organize the ﻿﻿Ninety-Nines﻿﻿, an organization of women pilots, becoming their first President. Amelia set dozens of women’s records for distance, speed, and altitude.

She married her publicist, George Putnam, in 1931 and he encouraged her to set more records, write books and articles, and even go on a speaking tour. Though Amelia grew weary of “the zoo part” of her work, she accepted publicity to raise money for serious flying. On May 20, 1932, she took off on her solo trans-atlantic flight, and after a dangerous flight, Amelia touched down on the coast of Ireland. In 1935, she became the first person to fly the Pacific Ocean from Hawaii to California, and the first person to fly solo from California to Mexico. She was also the first woman to compete in the National Air Races. Her awards include: Distinguished Flying Cross, the Cross of the Knights of the Legion of Honor, The Gold Medal of The National Geographic Society, and three years in a row, The Harmon Trophy as “America’s Outstanding Airwoman.” Then Purdue University provided Amelia with a Lockheed Electra and she began plans for a difficult ﻿﻿around-the-world flight. ﻿﻿

"The most effective way to do it, is to do it." -Amelia Earhart